In my previous blog entry on 3 November 2010 being a sad day in the State of Florida I outlined a list of many things to expect now that Rick Scott is going to become the 45th Governor of the State of Florida. One of these items I mentioned is the conversion of public property into private property.

You know how the City of St. Petersburg gave away the sidewalk on the northern half of 2 Av N from 1 St N to 2 St N to BayWalk, the shopping and entertainment complex in downtown St. Petersburg. Doing so was a conversion of what used to be public property into private property. You know what private property is, especially in a commercial environment? The authority of a person such as a store manager or a security guard to brand anyone, including law-abiding citizens, as second class citizens by having trespass warnings issued banning a person for life.

OK. If any of Rick Scott's ideas regarding privatization comes to fruition, it is going to mean that what used to be public property has been turned into private property. So, I drew up a sign based on the many blanket trespass warning signs found throughout Florida which I believe would have to be erected at all principal entry points into the State of Florida: 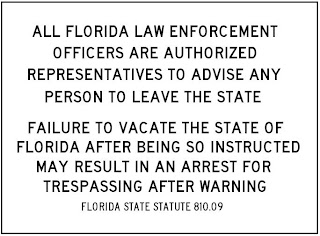 Above sign does not apply to Florida residents who are in possession of their REAL ID compliant Florida Driver's License showing your physical street address, which is a goldmine for stalkers and domestic violence perpetrators if your ID is lost and eventually found somehow. As a Florida resident, you will be expected to have your ID ready for inspection if Rick Scott gets his way with the Arizona-style immigration law which was his main campaign promise.

Just stay tuned when Rick Scott is anointed as Florida's 45th Governor on the steps of the Capitol in Tallahassee come January 2011.
Posted by Edward Ringwald at 20:26 No comments:

A Sad Day in the State of Florida

Wednesday, 3 November 2010, the day after the general election for the Governor of the State of Florida. It will be remembered as the saddest day in the history of the Sunshine State.

On the Republican side, Rick Scott who is a Florida businessman. He is well remembered for being the chairman and CEO of Columbia/HCA, who happens to be the owner of many for-profit hospitals in the Tampa Bay area including Northside Hospital in St. Petersburg. Columbia/HCA was raided by Federal agents in July 1997 which resulted in criminal charges consisting of 14 felony counts, among them overcharging the United States Government for Medicare charges among other things.

Tuesday, 2 November 2010 was an important election day not only in Florida but in the United States as well. Not only governors races were being decided in Florida and several other states, Congressional races were also being decided which had the strong potential of altering the makeup of Congress. Would the Democrats retain control or the Republicans take over?

Voter turnout in Florida, especially Pinellas County, was high. Despite early voting and voting by mail, turnout at the precincts was high and there were times when polling places got congested.

Then came 7 PM, the official closing time for the polls in the State of Florida. Rick Scott was ahead a little bit with Alex Sink trailing. By 11 PM, the results were in a dead heat; by that time we would not know who would be Florida’s 45th Governor – yet.

Until sometime after 10 AM on Wednesday, 3 November 2010. I took a quick peek at Bay News 9’s web site only to find the bad news: Despite a very close race, Alex Sink conceded to Rick Scott. Upon that announcement, Rick Scott became Governor-Elect Rick Scott.

My jaw dropped at that moment. A former CEO of a healthcare company involved in criminal charges now going to be in charge of the Sunshine State?

You got that right.

Today is a sad day in the State of Florida as it will be the day we elected an individual who stole from the federal government (as an executive with Columbia/HCA) Florida's 45th governor. Considering the economy and its impact on Florida, life in Florida as we see it is going to get worse instead of better.

Here's what we Floridians are looking forward to, now that Rick Scott is going to be the 45th Governor of the State of Florida. Now those of you Floridians out there that voted for Alex Sink in the recent election, as well as those of you Floridians out there that are out of work and cannot find work, are in danger of losing your home to foreclosure, finding out that you owe more than what your house is worth and struggling to make the monthly mortgage payments, or experiencing any other crisis related to living in Florida, you got yourself a front row seat in the house as to what to expect:

Our homeowners insurance rates going up.
Our property values continuing to slide.
Foreclosures at an alarming rate (and the homelessness that results).
Our civil liberties being eroded.
The State of Florida being sold to private enterprise.
Turning public property into private property.
No prospect of the economy making a comeback in Florida.
Unemployment at an all time high with no prospect of relief.
Support for oil drilling in the Gulf.
The demise of Florida's number one industry: Tourism.
Law enforcement being turned against the people.
No meaningful education anymore in Florida’s public schools.

Speaking about our civil liberties being eroded, remember Arizona’s unpopular immigration law that was passed earlier this year? Now that Rick Scott is going to be the 45th chief executive of the Sunshine State, he is going to see to it that such a law will get passed here in Florida. Want proof of what can happen if an Arizona-style immigration law were to be passed in Florida? Take a look at my related blog entry, America slowly becoming a police state and secession!

Remember when the City of St. Petersburg turned over ownership of the northern sidewalk of 2 Av N from 1 St N to 2 St N in downtown St. Petersburg over to BayWalk? This is a great example of public property being turned into private property, paving the way for private property owners – especially shopping center and store managers – to turn ordinary hard working Floridians into second class citizens by giving them trespass warnings banning them for life. The same thing is going to happen when the State of Florida suddenly begins to sell or give public property to private interests, only on a bigger and repeated scale.

Education in a Florida public school is meaningless anymore, thanks to the state mandated FCAT test the State of Florida shoves on public school students in many grade levels right around March. Parents can no longer be involved in their child’s education as far as public school is concerned: In fact, parents are no longer being allowed on school campuses unless there is a real reason, such as parent-teacher conferences. One elementary school in Manatee County (outside of Bradenton) has taken this to an extreme – parents who even step out of their car for non-school related business are declared second class citizens on the orders of the principal by issuing trespass warnings and banning them for six months at least. (Who says picking up your children from school is non-school related business?)

With the economy on a downturn and the housing crisis prevalent with no end in sight, I think the final nail in the coffin has been driven as to the fact if Florida will survive this economic crisis. With the recent oil spill in the Gulf of Mexico, tourism in Florida tumbled downward. Remember too that the Republican Party has had a stranglehold on Florida for the past 12 years under two recent Republican governors (Jeb Bush and Charlie Crist) and the Republican Party will continue their stranglehold on the Sunshine State as long as it takes.

Rick Scott mentioned as part of his victory speech that he works for every Floridian. In my opinion, I don’t think so.

3 November 2010: A day that will be remembered as a sad day in the State of Florida. Just sit back and enjoy the show when Rick Scott is inaugurated in January 2011 and takes the reins of the highest office of the State of Florida in Tallahassee.
Posted by Edward Ringwald at 19:07 No comments: