Johns Pass - where would you be if you went straight across the Gulf of Mexico?

When was the last time you crossed or waited at the Johns Pass Bridge? Perhaps as you cross the steel grid deck of the temporarily two lane Johns Pass Bridge (and you see the Gulf of Mexico through the new southbound lanes under construction you probably asked yourself:

If I were to go directly west right from the bridge tender’s tower of the Johns Pass Bridge straight across the Gulf of Mexico, where would I be? Mexico? Texas? 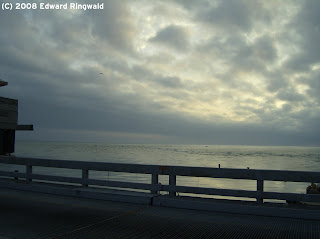 You would land at a town called Port Aransas, which is on the coast of the Gulf of Mexico in Texas. Port Aransas is located east-northeast of Corpus Christi and is the terminus of Interstate 37.

The distance from Johns Pass to Port Aransas, point to point straight across? About 900 miles, give or take.

Now you think you could build a long distance bridge from Johns Pass in Florida to Port Aransas in Texas? No. There are too many natural and legal obstacles to overcome, not to mention the mightiest engineering hurdle ever accomplished. But I did some Internet searching a while ago for a trans-Atlantic crossing and – to my surprise – I believe it could be done.

But let’s say for a moment we had this almighty crossing. What could that do for us Tampa Bay area residents?

For one thing, it would open up another source of visitors: The southern west coast of the United States, including California. Add in a few of the western states Interstate 10 covers – Arizona, New Mexico and Texas – and you got yourself another tourist base in addition to the tourist base we get from up north.

I also have a gallery of Johns Pass Bridge photos and information as a part of my Drawbridges of Pinellas County collection right here at EdwardRingwald.com. To check out the Johns Pass Bridge collection, feel free to click on this link. Besides, while you're there feel free to check out the other drawbridges of Pinellas County as well.

Posted by Edward Ringwald at 23:28